VALEP was programmed by Maximilian Damböck and designed by Christian Damböck. It was launched in May 2021, e.g., on Daily Nous, Leiter Report and the IVC website.

VALEP is located at the server valep.vc.univie.ac.at, which belongs to the University of Vienna. It is operated by the Institute Vienna Circle, which also covers the running costs for the server. Further financial support came from the following sources:

In a future development phase of VALEP, projected for 2022, its data will also be mirrored in the University of Vienna's digital depository Phaidra. The staff and consultants of Phaidra have already supported the initial development of VALEP, including aspects of archival science (Susanne Blumesberger), database design and the technical integration of Phaidra (Raman Ganguly), copyright issues (Seyavash Amini Khanimani), and all details of the metadata design of VALEP (Ratislav Hudak).

We are seeking cooperation partners with several international archives that hold material on the history of Logical Empiricism. If you are interested in cooperating with VALEP as an institution, or if you are simply using VALEP for your own research and are interested in depositing your collected material, please contact Christian Damböck.

The Archives of Scientific Philosophy has been sharing their electronic resources with VALEP. This includes all scans of the Papers of Rudolf Carnap, Carl Gustav Hempel, Richard C. Jeffrey, Hans Reichenbach, Frank Plumpton Ramsey, and Rose Rand produced by the ASP. The material comprises about 30,000 scans and is already fully available in VALEP. We would like to thank Ed Galloway for his most generous support and Clinton T. Graham for transferring the files.

The scope and mission of VALEP

VALEP is an archive management tool that is intended as a platform for the history of Logical Empiricism and related currents.

VALEP stores titles, descriptions and the like as Unicode. But some metadata categories that include date, location, language, persons, and institutions are stored here via references in a relational database and/or using special formats and parsing tools, e.g., EDTF for data, and an internal tool for the mereological grasp of locations. See the metadata page for the details.

Is it digital humanities?

If one expects from a digital humanities project the adoption of sophisticated statistical methods of experimental research, then the answer is clearly no. Though the data pool built by VALEP might be used for the adoption of such methods in the future, VALEP neither now nor in the near future is planning to integrate any tools for complex statistical evaluation.

On the other hand, VALEP is certainly aiming to collect large amounts of data. The history of Logical Empiricism, together with related currents, such as Neokantianism, French Positivism, British Empiricism, and American Pragmatism, comprises dozens of major and probably thousands of minor figures, including university and private scholars. Many of the papers of these relevant individuals can be found in public institutions and private collections. Additional material was collected by academic and private institutions. There are thousands of manuscripts, publications, and probably millions of letters between representatives of the relevant scientific movements that might add significant research value in one way or another, in our studies of Logical Empiricism. VALEP allows us to store retain and evaluate all these sources, as soon as we get them available in electronic form. Then, we can search and filter them according to our needs and interests, to find the material relevant to us. This is, of course, also an important aspect of digital humanities.

Existing tools for the management of archival sources include (1) those tools that academic archives, such as the Archives of Scientific Philosophy use; (2) open tools such as PhilArchive, where everybody might upload electronic documents; (3) tools tailored to the presentation of material of a specific origin, such as the papers of Ludwig Wittgenstein. All these tools have in common that they are more or less document oriented. They do not mirror the physical structure of an archive but rather store documents that form a particular unit of metadata. This approach could be fruitful, if the documents are processed thouroughly and the metadata is clear, transparent and sufficiently complex.

However, most of the existing tools cover only rudimentary metadata, and, in the case of public archives, single documents are not processed as a logical unit (e.g. letter from Otto Neurath to Rudolf Carnap from December 26, 1934), but rather, the archives provides constructed units, viz., folders that contain several letters from Carnap to Neurath from the years 1923 to 1929. Sometimes, they might even include additional material that does not directly relate to the main topic of the unit. In such cases, offering effective and meaningful metadata may not be possible at all, simply because the document units are too vague.

In cases where a digital archive only offers rudimentary metadata and rather ambiguous documents, it might be helpful to include a presentation of the digital material that represents the physical structure of an archive. Archives typically structure their material into collections and subcollections (or series and subseries), shelves, boxes, folders, and the like, and the fine-grained structure of this organization very often already represents a certain order, e.g., distinguishes between manuscripts and correspondence, puts some chronological order to the material and/or picks out certain topics or correspondence partners. Even if such an order is quite inconsistent, or even pretends to bring order to chaos at times, users of an archive usually are able to work with it in a mnemotechnical way, often supported by useful finding aids that exist for an archive. Therefore, to make digital archival sources more transparent and usable would be to organize the material in a way that mirrors the physical structure of the analog archive.

The logarithmic scale of archival work 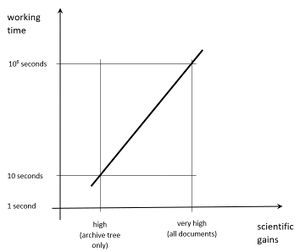 Note also that representing an archive in the way in which it is physically organized also yields a very strong pragmatic benefit. If digitized copies are stored in folders that mirror the structure of the analog archive, then you could upload the entire material, basically, with a single mouse click. The archival work being involved here is close to zero. On the other hand, if this archive is really large as, for example, the Schlick papers in Haarlem, which comprises some 50,000 pages, or the Carnap Papers at the ASP, which consists of close to 100,000 pages, then you can expect to process tens of thousands of documents. If an archivist, say, processes 20 documents per hour, this eventually might amount to several years of full time work. So, we compare here two extremely different points on the scale of gains divided by working time. Most of the available archival resources will never be processed on such a micro-level document structure, for mere lack of time and financial resources. However, these sources might still be made available, at the level of representation of the physical structure of the source.

Metadata can be needlessly complex and confusing. Therefore, a careful selection is important. This includes that a document should be associated only with those metadata categories that might become relevant. Only a letter, for example, has a receiver or a place of posting, whereas a manuscript unlike a published book or article may not offer any publication date. So, one important aspect of making making metadata adequate is to restrict documents of a certain category to those metadata categories being relevant here.

But metadata should also be carefully selected, regarding their format. This holds, in particular, for key metadata such as date and location. Dates should be able to cover not only (several) single days but also entire months or years, and date ranges, e.g. from December 24 1924 until October 1930. This allows one to cover also cases where the date of a document is not sufficiently localized or where a document was produced over a longer period and/or at different days or years. Locations, on the other hand, should become embedded into the mereological structure of geography. That Vienna, for example, belongs to Austria and Europe but also to the Habsburg Empire and the German speeking world, is a fact that is not easily to be reproduced but is needed in order to pick out all Viennese locations, if one filters documents from Vienna, Austria, Europe, the Habsburg Empire, or the German speeking world. Finally, in many other cases, e.g., regarding persons, institutions, languages, a consistently searchable and filterable layout is easily obtained if the database uses relational features and stores these items in certain predefined lists or tables. References to these predefined resources, however, should typically be optional, in order to keep the structure of a database as flexible as possible.

Documents might have instances (versions, chapters) being spread over different archival sources

An important aspect of the integration of several archival sources is that documents tend to be located not only in one folder/box that belongs to collection X. Rather, the following holds quite frequently:

A note on copyright

Another logarithmic scale is emerging here. It is often quite easy for big figures such as Carnap, Reichenbach, or Quine, to get copyrights granted for everything they wrote. But in their papers there is also a wealth of material that was written by others - letters TO Carnap, Quine, Reichenbach - or touches upon privacy rights of others - when Carnap talks in a letter ABOUT a person X. To solve all the copyright issues that emerge in a huge Nachlass might become a tedious and almost unmanagable task. Thereofore, it might be desirable that a an database enables to deal with these issues in a maximally flexible way. Material might be either kept internal in its entirety - metadata plus facsimiles - or it might become published (because metadata are unproblematic, in principle) but without public access to the facsimiles. Moreover, it should be possible to restrict access to the internal level of a database to those parts of the material that the account holder is allowed to see.

Along the lines of these considerations, the following features would be desirable additions to the typical coverage of existing archival tools:

Indeed, the aforementioned features are all offered by VALEP. The design of this tool was from the beginning centered around the idea of combining representation of an archive via its physical structure with representation via documents. The rest of the innovative features of VALEP in part directly followed from this key idea -- this is true, for example, for the implementation of versions and chapters who somewhat intermediate beteween (general) documents and archives --, and in part dived into the conception on the basis of feedback from archivists and the designer's own experience at the archives.

VALEP is available to everybody and it's free of charge in all its varieties. Typical users of VALEP might include:

If you are interested in using VALEP as an institution, private person, or researcher, please contact Christian Damböck.

The recent (and first) version of VALEP was developed in 2020/21. Until fall 2021 we plan to implement, among other things, the following additional features:

If you found any bugs, want to report shortcomings of VALEP or point to desired features, please contact Christian Damböck.